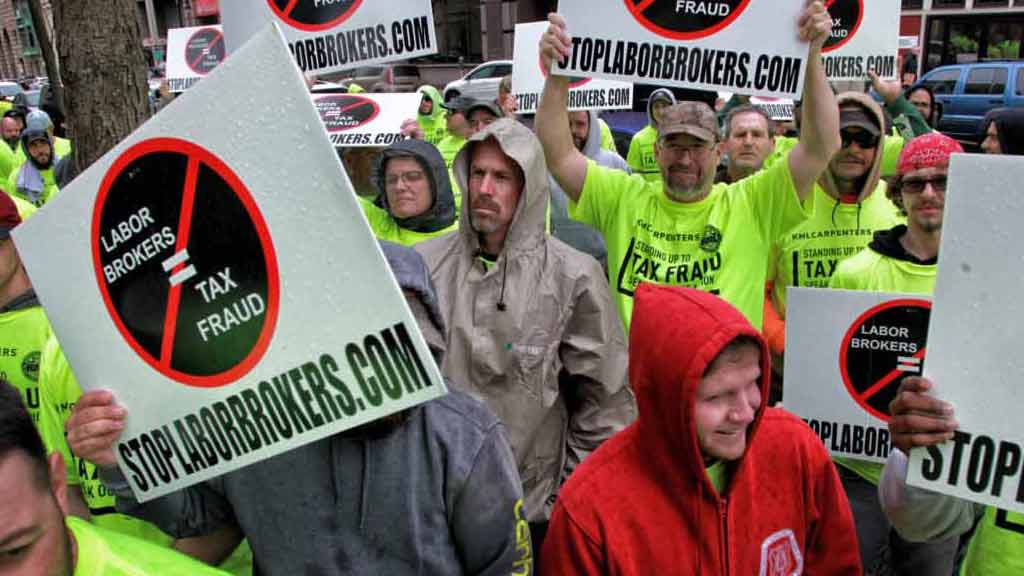 How tax fraud impacts us

TRENTON – Several hundred union carpenters, all wearing shirts with the phrase “Standing up to Tax Fraud” emblazoned on the back, gathered in front of the Internal Revenue Service Building here for a rally to raise awareness to the amount of tax revenue lost every year due to tax fraud occurring in the construction industry.

The rally, strategically scheduled for April 15 – Tax Day – to emphasize the seriousness of the issue, was organized by the Keystone Mountain Lakes (KML) Regional Council of Carpenters and featured several members of the New Jersey Legislature, including Senator Fred H. Madden Jr. (Fourth District) and Senator Troy Singleton (Seventh District), as invited speakers.

“Tax fraud is an attack on the hard working people of this country,” said the morning’s first speaker Bill Sproule, Executive Secretary-Treasurer of KML. “It is estimated that $450 billion dollars in tax revenue is lost every year due to tax fraud. That is money that could go to build schools, infrastructure and provide services for communities.”

In a conversation following the rally, Sproule cited a 2016 Williams J. Hughes Center for Public Policy white paper titled “The Underground Construction Economy in New Jersey” to illustrate the wide-reaching effects of the problem in the Garden State.

“In New Jersey, the underground economy is anywhere from $536 million to $1.2 billion,” Sproule said. “That’s money that’s not being taxed.”

Those numbers just demonstrate activity in the construction industry. Overall, according to the study, the underground economy is estimated to be worth between $7.3 billion and $16.3 billion. Income tax lost to off-the-books employment and misclassified workers totals $20 million. More than $3 million in unemployment insurance goes unpaid.

Singleton, a democrat from Moorestown and a Council Representative with KML, believes enough is enough.

“The people who should be accountable we have to start holding them accountable,” Singleton told the crowd. “What we have to do now is stand up for the worker. We have 80 senators and 80 assemblymen and we all have to stand together and get the job done. Anyone who is not getting the job done doesn’t deserve to have the job. There should be no more money going out the back door.”

Both Sproule and Madden, who is the chairman of the Senate Labor Committee, believe a good first step would be to enforce laws already on the books.

“I believe we should take a hard look at this and call for stronger enforcement of laws we already have in place,” Madden said. “This involves a wealth of lost revenue to the state. We have laws in place with penalties, but those laws are only good if they are being enforced. I believe we should reward people who see fraud going on and report it. It is unacceptable and we have to put it in its place. Then we have to make sure we prosecute these cases.”

Monday’s Day of Action rally was one of nine held on Tax Day. Others were conducted in Philadelphia, Harrisburg and Pittsburgh; Baltimore, Washington D.C.; Richmond and Roanoke; and Charleston, West Virginia. More have been scheduled throughout the country over the next couple days. Their purpose is to educate, but also to put pressure on states to root out and prosecute contractors who are committing tax fraud.

Monday’s rally was an important step taken to raise awareness to this critical issue. It won’t be the last.